The following suggestions can help you to practice reading in Japanese more efficiently. They assume that you are reading a PDF version of one of our three books on a computer screen. We do not recommend that you practice reading the PDF files on hand-held devices like phones and tablets because such devices do not facilitate the selection of a single kanji, and they do not permit multiple windows to be opened on the screen. If you are interested in reading the files on a touchscreen computer, please see the information near the end of this page.

Formatting of the Kanji Catalogue

For example, the heading for the kanji 自 is “0055. 自” (this occupies 7 spaces; again, notice the empty space after the period). If you click in the Kanji Catalogue window and open a Search box, you will be able to locate this kanji heading in one of two ways: either by typing “0055.” (this occupies 5 spaces) or by typing “. 自” (this occupies 3 spaces; think “dot space kanji“). In order to “type” a kanji your computer should be equipped with an IME (input method editor) that converts romaji typed on your keyboard to kanji on your screen. Alternatively, you can place a copied kanji in a Search box by pasting it, as described below.

With some software, including Adobe Acrobat DC, it may not be necessary to include the “space” when typing “dot space kanji” in a Search box. Typing “dot kanji” may be enough. Please experiment with your software to see if you need to use the space or not.

Reading Book 1  on a Computer Screen 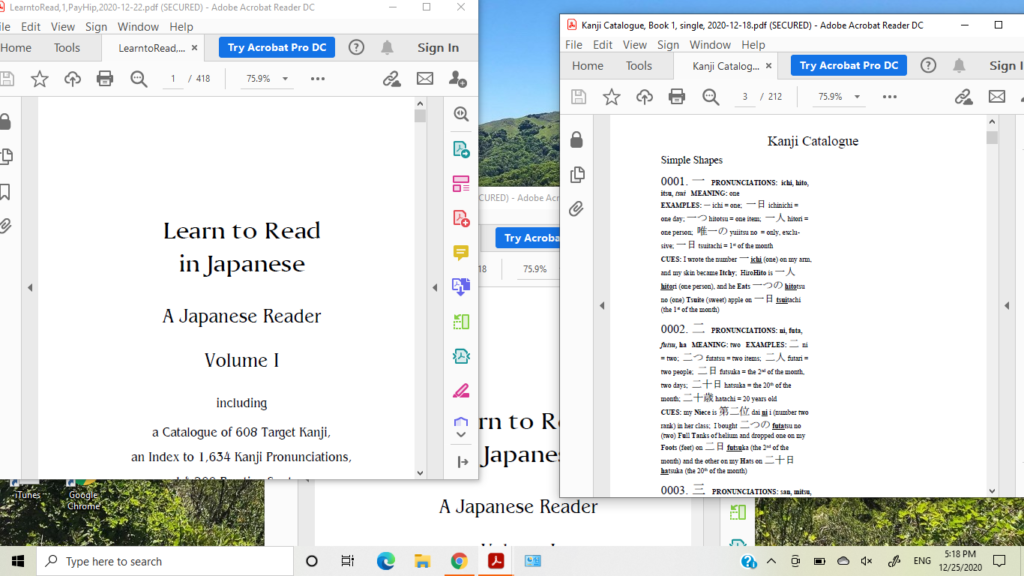 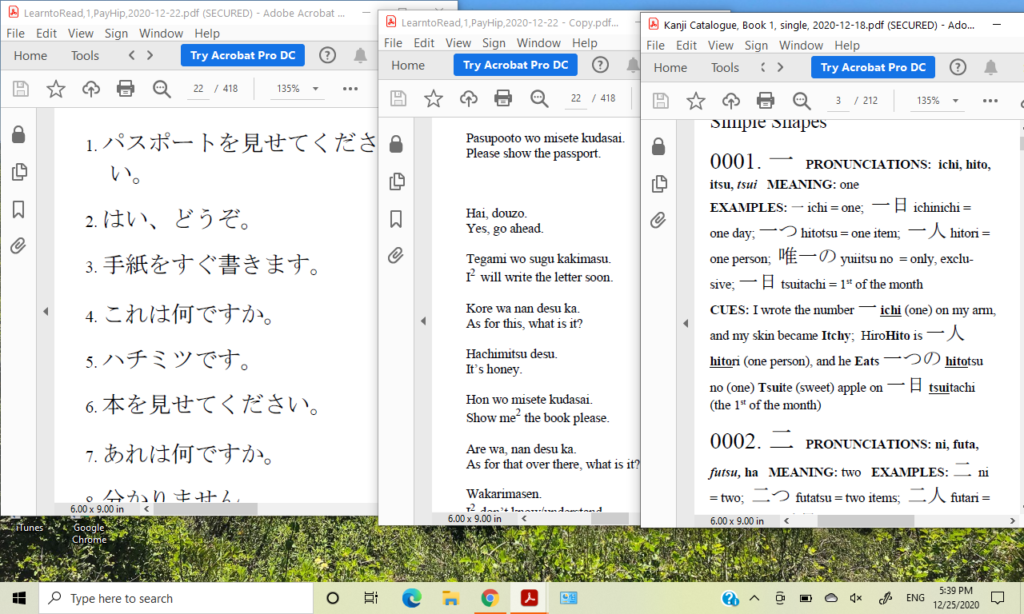 The following video demonstrates the use of these techniques to read Volume 2 of the book, but in this video only two windows are open, one for the Japanese Reader and the other for the Kanji Catalogue. After making the video, I realized that it would be easier to use three or four windows, as described above.

Reading the Books on a Touchscreen Laptop Computer

A disadvantage of the techniques described above is that they require that one sit in front of a computer while engaged in Japanese reading practice. I wanted to find an alternative that was more comfortable and more flexible. For example, I wanted to be able practice reading on flights back and forth to Japan. So I purchased the equipment described below and made another video showing how reading practice on a touchscreen laptop might work.

The following video demonstrates the use of the touchscreen laptop with a total of five windows open on the screen. In addition to the windows mentioned above, there is a window containing supplemental reading material from Satori Reader and a window containing the “Mnemonic Dictionary,” which was the precursor to the current Glossary. If you would like to be able to look up vocabulary terms quickly while you practice reading, you may open the PDF version of the Glossary in this fifth window.

We wish you the best of luck with your Japanese reading practice.